In the last post i have introduced you to Android Architecture and also explained various layers in that but i haven’t discussed about the Top most layer i.e “Applications”. So in this post i will be talking about Android Application and their functioning keeping security in mind.

Android apps are written in the Java programming language. The Android SDK tools compile your code—along with any data and resource files—into an APK: an Android package, which is an archive file with an .apk suffix. One APK file contains all the contents of an Android app and is the file that Android-powered devices use to install the app. 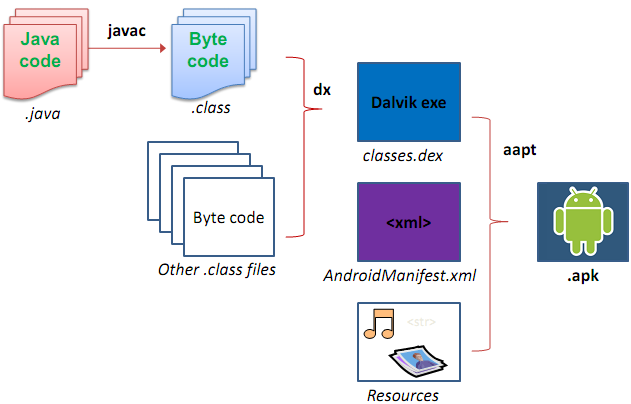 An APK file is an Archive that usually contains the following directories:

App components are the essential building blocks of an Android app. Each component is a different point through which the system can enter your app. Not all components are actual entry points for the user and some depend on each other, but each one exists as its own entity and plays a specific role—each one is a unique building block that helps define your app’s overall behavior. You can skip the content given below if you are already familiar with them.There are following four components of app:-

To be simple an activity represents a single screen with a user interface. For Example,one activity for Login and another activity after login has been successful. It is kind of every new screen I will discuss more about it later when needed.

If a particular application needs access to any of the API then it need to mention that permission in AndroidManifest.xml file. You might have observed that when installing a particular application from Google Play Store it ask for several permissions needed,if you don’t allow then app won’t install. If that user agrees to grant those permissions then Android operating system gives access to that Protected API.

Below is the Permission Dialog while installing famous Subway Surfer Game. 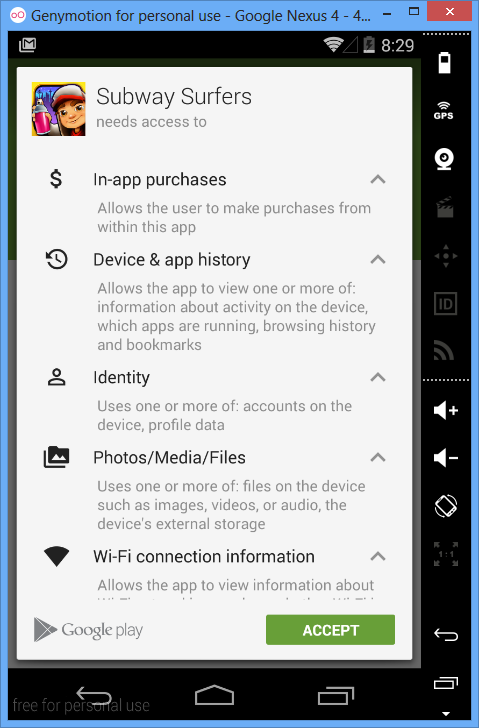 Did you ever thought ? why this game needs access to your Photos, Browsing History, User Accounts,Bookmarks,etc? Probably not but you should.

Once installed on a device, each Android app lives in its own security sandbox: – The Android operating system is a multi-user Linux system in which each app is a different user.

In this way, the Android system implements the principle of least privilege, that is each app by default has access only to the components that it requires to do its work and no more. This creates a very secure environment in which an app cannot access parts of the system for which it is not having permission. As every Android app runs in its own sandbox environment and cannot affect other apps by default but two apps can have same Linux User ID and can also share the same Dalvik VM if they are signed with the same Certificates.

That’s All For the day! Feel free to comment about any issues you are facing